Here is Part 2 of this post…This weekend, I’ll post a heart-healthy recipe incorporating two of the 5 tips!

The only way I used to know how to cut onions was either into circles, half-moons, or wedges.  I can now add little “squares” to my repertoire!

Take a whole onion and cut it lengthwise so you are cutting through its stem and top.  Remove the outer skin.  Lay one of the onion halves flat side down, the top heading right if you’re right-handed, left if you’re left-handed. 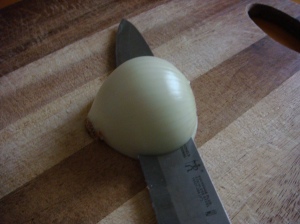 Using a chef’s knife, start from the flat end of the onion (closest to cutting board) and make a cut from top to root, away from you, stopping before the root.  Make sure you know where your fingers are at all times!  Repeat in even increments.

Then make perpendicular cuts in the same increments.

Now cut the onion as if you were making half-moon cuts, which should result in little identical pieces.

So if you make your first set of cuts ½ inch apart, make sure the other sets of cuts are ½ inch apart in order to get your diced onion as symmetrical as possible.

There are two reasons for salting eggplant.  One is to remove the bitter taste some eggplants have, the other reason is to avoid a soggy mess when making dishes such as eggplant parmesan.  Both problems can be resolved by getting rid of all the water they hold.  Line the bottom of a large colander with one layer of cut eggplant (cut the way you will be using them in your recipe) and then sprinkle salt over them.  Layer with more eggplant and continue the process until the colander is full or you finish the eggplant.  Top the eggplant with a plate and weigh it down with something heavy enough to smoosh the eggplant down a bit.  Make sure you either put the colander in a bowl or in the sink as the eggplant will release a lot of water.  After 2 hours, remove the eggplant, give them a little squeeze, wipe off the salt, and lay the slices on paper towels to absorb any remaining moisture.

Every day can be New Year’s Day. In any moment, you can start fresh. 💥♨️ Just for fun, when you automatically have a reaction or opinion about something...examine it. Ask yourself if it’s doing you any good to think that way. We’ve picked up a lot of thought patterns along our journey — some adopted from others — and those habits of thought may not be aligned with who you are and what you want right now. 🧐🤔 Every day and each moment is another chance to think and do something differently. Be kind to yourself and know that you are more powerful than you give yourself credit for. 😤💪 Happy New Year!! 🎆 #happynewyear #2020 #2020clarity #selflovequotes #personaldevelopment #dailyreminder #quotes #quotestoliveby #lifecoaching #meantformore
Anyone else feel like a different person from last year?? . . I don’t let my mind hang out too much in the past, but I’m finding a lot of strength and comfort in reflecting upon the last 12 months. . . Last December, I was in San Diego at a conference. On my day off, I sat on a beach and had a “knowing” I was home. (I referred to it in my insta post as “my happy place”). At the time, my next career move was unclear, I was unsure of what to do after my lease was up in NYC the following spring. Everything was up in the air. It was a scary time but also one full of possibilities. It was an opportunity to dream big and believe in those dreams. (Easier to see it this way in hindsight, of course.) . . This December, I’m standing on the beach in this no-filter picture, but I’m not a visitor anymore...this is home. So much has happened in a year — externally to be sure, but internally even more so. . . I’m appreciative of the journey 2019 has taken me on, I’m honoring how far I’ve come, and I’m getting ready for what’s next. 🌟What about you? . . #reflection #newyear #newyearnewhome #californiadreaming #oceanlife #watersign #2019reflections #whatadifferenceayearmakes
What if it could be that easy? How freakin’ psyched would you be to start each day, knowing that everything you want is waiting for you to let it in?😄 If you like the sound of that, I recommend checking out📚Ask and It Is Given📚by @abrahamhickspublications #loa #lawofattraction #livefree #manifestyourdreams #lifecanbeeasy #resistancefree #dothingsdifferently
My first legit breakfast in my new West Coast home...with some reminders of loved ones on the East Coast 💗Plate from @jill.rath 💗Napkin and bar napkin from @maryamshari ‘s #stayweird wedding 💗Coffee mug reminding me how f^cking magical I am from @leslieh138 🥰 😍 🥰 #thisisbliss #norcal #brunch #bliss #breakfastalfresco #breakfastathome